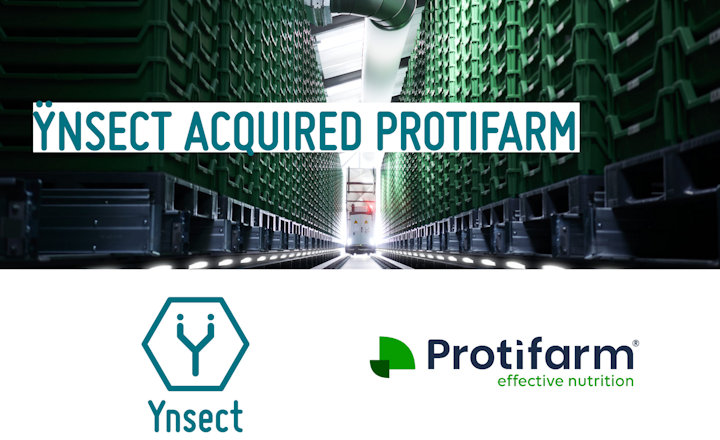 Ÿnsect has announced the acquisition of mealworm ingredients supplier - Protifarm. This joint offering is hoped to accelerate its manufacturing capabilities with a third production site.

This integration will bring the Protifarm 'AldabaPro' product line of mealworm ingredients under Ÿnsect's wing, which comes in both textured and powdered forms and are currently being used in baked goods, sports nutrition, meat, and meat alternatives.

Following the European Food Safety Authority deeming mealworms safe for human consumption this January, Ÿnsect is fast-tracking its impact in the alternative protein sector by expanding into the market of food ingredients derived from insects.

In addition to its sites in France, Ÿnsect now expands internationally with the integration of Protifarm, which has a production site based in Ermelo, one hour east of Amsterdam.

With two Ÿnsect production sites in operation and one under construction, the result is an increase in volume and an acceleration of production and delivery to customers in the short and medium-term.

This will represent a total capacity of over 230,000 metric tons of ingredients per annum. Ÿnsect and Protifarm already share a lot of common ground, from the way they approach science and technology on mealworms to quality and operational excellence.

Protifarm brings nearly 40 years of experience in insect breeding and owns 37 patents across 10 categories, bringing the total number of patents owned by Ÿnsect to nearly 300.

Ÿnsect will also gain a skilled workforce from Protifarm, with expertise essential to this integration. The Dutch production site employs about 50 people in production, R&D, and cross-functional areas.

The local management team will remain in place, in charge of integrating Protifarm into the Ÿnsect group.

Expanding to the food sector

Protifarm is a global leader in the insect food ingredient sector, with established food customers in Germany, the Netherlands, England, Denmark, and Belgium, allowing Ÿnsect to strategically boost its growth in the sector.

The Netherlands is a world leader in food and agriculture and offers significant advantages in terms of export possibilities, being ideally located for customers in the Benelux and the North of Europe.

The country is spearheading innovation with universities like global food and Ag leader Wageningen University, which is pioneering with its own insect research center.

Protifarm’s Novel Food application is expected, same as Ÿnsect’s, to receive EU approval in the near term. With many consumers in the Netherlands highly oriented towards a lifestyle of health and sustainability, there is also a higher acceptance rate among Dutch consumers of food produced with ingredients derived from insects.

Please use the 'Request Information' button for more details or you can visit their website: www.ynsect.com