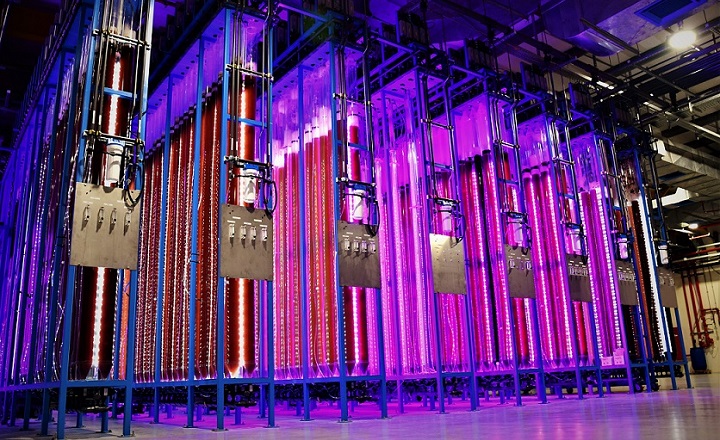 The ingredient is branded Ounje, which means “Food” in the Yoruba language. Its formulation mimics the red juices of real meat without harming animals or the planet, and without the need for color additives.

As Yemoja discovered, when this marine ingredient is combined with other derivatives from the same Porphyridium algae strain, it provides a nutritious plant-sourced heme substitute that renders the sensory characteristics of juicy meats for plant-based and cultured meat products.

Yemoja produces its heme substitute via a cold process in its GMP-certified facility without using any organic solvents. The platform manipulates light, temperature, and pH to yield high concentrations of bioactive compounds with minimal resources usage and sharp waste reduction.

“While working on a new formulation for cosmetic applications, we serendipitously discovered that this composition yields a substance that resembles blood in appearance and texture,” notes Amikam Bar-Gil, PhD, co-founder and CTO of Yemoja. “Encouraged by the first test results, we decided to push the boundaries further and test it on products. The results were an immediate proof of concept.”

When it comes to plant-based meats and hybrids, there is a strong demand for a convincing blood-like substitute. But while beetroot juice and other color additives – the most used in the industry with that purpose – provide the desired color effect when the product is raw, they won’t change color as meat does when cooked. Quite often, the workaround is to add sugars, which caramelise and become dark-brown when heated.

By contrast, Ounje not only provides the initial red pigment to raw plant-based meats, but also browns up nicely when put to the sizzle. Moreover, it also coagulates like real meat juices. “We found the polysaccharides within this particular algae species express a gelatin-like viscosity when cooked. Its natural fiber also provides an appealing crunchiness and an appetizing meaty aroma,” says Bar-Gil.

Beyond the visual and textural appeal, algae also provide a nutrient boost to the product, with 20%-30% protein load and an essential amino acid profile. They are also a valuable source of essential fatty acids, polyphenols, minerals, and vitamins.

“The naturally-sourced alternative proteins category is growing rapidly,” says Erez Ashkenazi, co-founder and CEO of Yemoja. “Our cultivation system is a high-value, yet cost-effective solution that manufacturers can adapt to their needs, to take advantage of this trend.”

Ounje fits well in cultivated meat applications: “We believe our algae can imbue cultured meat-cells with a nutrient-rich media to feed on, and we are assessing its potential as a suitable scaffolding biomaterial for cell growth. Its structure will allow it to mimic the behavior of meat, especially when it hits the skillet,” notes Bar-Gil, adding that the ingredient can make up to 10% of the end-product. Yemoja is piloting its ingredient with a plant-based and a cultured meat producer. Reported results so far have been highly promising.

Yemoja was founded in 2017 by a team of marine biology and biotech experts with a shared vision of leveraging novel engineering methods to provide high-value microalgae for cosmeceuticals, nutraceuticals, and functional foods.

The company has raised $11m in venture capital, and it’s entering round B in fundraising. The start-up is also part of a consortium working on an EU-funded project called Algae4IBD, with the goal of studying the potential of micro and macroalgae compounds for the prevention and treatment of inflammatory bowel disease (IBD).

To learn more about Ounje, visit the company's website: yemojaltd.com