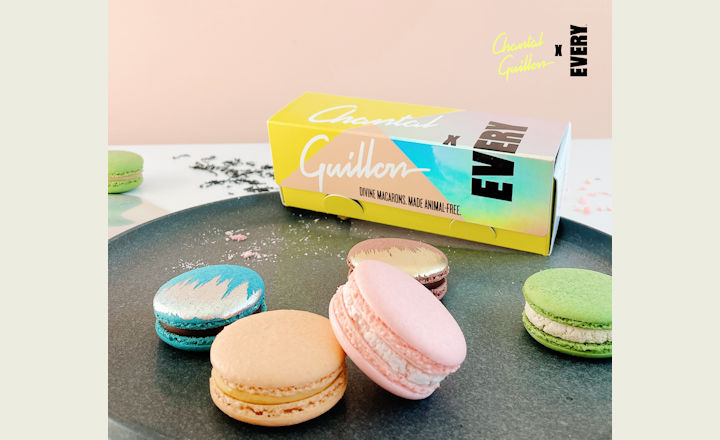 The EVERY Co. has announced the launch of the world’s first animal-free egg white, EVERY EggWhite™. The revolutionary ingredient offers the taste and culinary functionality of egg whites needed by bakers and chefs but is made without a single chicken. To celebrate the industry milestone, EVERY™ chose to work with the ‘holy grail’ of egg white taste and functionality – the iconic macaron. EVERY partnered with Chantal Guillon® — maker of the must-have French macaron of the West Coast — to sell the first-ever animal-free macaron made with EVERY EggWhite.

The macarons will be available in-store at Chantal Guillon’s San Francisco and Palo Alto, Calif. locations, and for Bay Area delivery via partners including GrubHub, UberEats, Seamless, and Allset.

EVERY exists to accelerate the world’s transition to animal-free protein. EVERY uses precision fermentation to brew real animal protein without the use of a single animal. EVERY EggWhite™ is the third product launched from EVERY’s platform in less than 18 months, adding to its ingredient portfolio as it leverages its $175M injection of capital received late last year to drive commercialization.

The Chantal Guillon specialty macaron’s featured ingredient, the world’s first animal-free egg white by EVERY, possesses all the functionality of egg whites but requires no factory farms and less water, land, and greenhouse gas emissions. Unlike all other alternatives in the market, EVERY EggWhite™ tastes, whips, and gels like a chicken-derived egg white to provide the same height, foam stability, aeration, and texture needed for baking, and can be used in applications that span the gamut from cakes, cookies, and breads to protein bars, plant-based meats, and pastas. It is suitable for vegans, but it is not suitable for those with egg allergies due to its game-changing nature-equivalent formulation.

"The egg white is one of the crown jewels of the food industry, known for its unique functional properties that make it almost impossible to replace –– until today. Today is also the first time consumers anywhere in the U.S. can get a taste of EVERY EggWhite and the fruit of seven years of deep R&D,” said Arturo Elizondo, CEO, and founder of EVERY. "It is an honor to bring this to the world with a brand known for having the highest standards – Chantal Guillon, and in an application that has been touted as the ultimate litmus test of egg white functionality in the culinary world: the iconic French macaron. The era of truly uncompromised food is here: all the taste, none of the baggage"

The limited-edition Chantal Guillon and EVERY co-branded macarons will be handmade in Chantal Guillon’s San Francisco SoMa location and shipped nationwide. The macarons will be sold in boxes of six, including flavors of Earl Grey, passionfruit, pistachio, strawberry, Tahitian vanilla, and dark chocolate. Each box will cost $28, available while supplies last.

“Our mission is to push boundaries and bring the best ingredients and techniques to the macaron, the iconic French pastry,” said esteemed pastry Chef Patrick Lassaque, co-owner of Chantal Guillon with wife Lubna Lassaque. “We never compromise on our quality or taste, which is why we were elated to partner with EVERY to do what’s never been done before: create a truly uncompromised macaron for the world – kind, sustainable, and incredibly delicious. Bon Appetit!”

Mentored by legendary chefs Alain Ducasse and Marc Ehrler, Chef Patrick Lassaque discovered his passion for the culinary arts as a young boy in France. For more than 30 years, he built his reputation of excellence at the most world-renowned, luxury resorts in St. Tropez, St. Barts, London, Paris, Nice, and more. Chef Lassaque and his wife, Lubna, have been baking macarons with French opulence and Californian innovation ever since.

Since its founding in 2014, EVERY, formerly Clara Foods, has pioneered the movement towards a disruptive advance in food technology by developing real animal protein without the use of a single animal, starting with animal-free pepsin, the world’s first animal-free soluble egg protein, EVERY Protein™, and now its flagship product, the EVERY EggWhite. EVERY will continue to expand its product platform, offering a broad set of ingredient solutions for use in food service and consumer packaged goods applications. Proteins by EVERY will be sold globally by Ingredion, a leading Fortune 500 ingredients distributor. EVERY has also partnered with ZX Venture’s BioBrew, the global investment and innovation group of AB InBev, to brew its animal-free proteins at scale.

For more information, visit theEVERYcompany.com or use the green "Request Information" button below to contact the supplier for details.