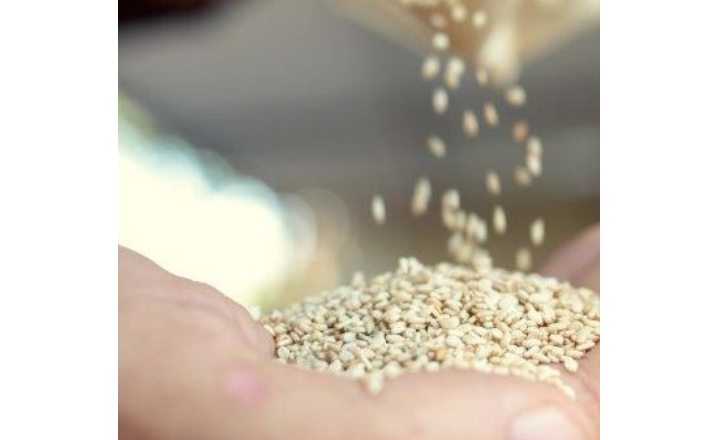 Equinom is a plant-based nutrition company that develops new non-GMO varieties of novel grains to create higher quality ingredients for innovative plant-based foods,  have collaborated with Dipasa, one of the world's leading sesame seed processors and exporters to develop a first-of-its-kind high-protein sesame seed and functional ingredient and bring them to market.

With over 40 years of experience, Dipasa is recognized as one of the world’s best-in-class sesame processors and suppliers. Based in Mexico, they are dedicated to globally exporting some of the world’s best food and cuisine ingredients. Current Dipasa clients include familiar fast food and global food brands. By using Equinom’s proprietary platforms such as genomic optimization algorithms, AI application profiler, and unique database, the two have collaborated to launch a new variety of Smarter Sesame Protein, a non-GMO/gluten-free and potentially organic alternative that will produce high-protein sesame concentrate. As a part of this collaboration, Equinom will develop the new variety and Dipasa will process it and deliver it to the market.

The global sesame seed market size is expected to reach $17.77 billion by 2025, in part as a result of its growing popularity as a functional ingredient in plant-based diets. Up until now, sesame has primarily been used as a cooking oil, in spreads or condiments, or in bakery and confectionery products. Due to sesame’s relatively low level of protein, which is about 23%, the concentrate that Dipasa is currently producing has roughly 50% protein. Falling short in comparison to competing sources of plant-based proteins such as soy and pea that reach levels of 70% protein as a concentrate, sesame is not commonly used as a core ingredient in plant-based foods.

The collaboration between Dipasa and Equinom to deliver high-protein Smarter Sesame Protein will be the catalyst for sesame to emerge as a foundational building block for innovative plant-based foods. By combining the AI-technology capabilities of Equinom with Dipasa’s production and distribution capabilities, they will produce a sesame concentrate that boasts 65-70% protein content.

In addition to Dipasa’s Smarter Sesame Protein development expertise, the company’s global reach paired with Equinom’s ability to provide seeds on a mass scale will create a pipeline for an affordable plant-based protein that can satisfy the appetite of leading consumer brands. Furthermore, Smarter Sesame Protein will become a value-added crop to the US farming market.

“Protein content has been the main barrier for sesame protein,” said César Coello, CEO of Dipasa. “Having the ability to supply a sesame flour or Sesamina® with a higher protein content will provide customers with an even better alternative to commonly used plant-based proteins, because of its numerous characteristics that comply with current market demands: non-GMO, organic, kosher/halal-certified and gluten-free. Combined with a very neutral flavor profile that makes it an extremely adaptable ingredient, Smarter Sesame Protein will be a unique addition to the plant-based protein industry, one that is competitive with soy and pea.