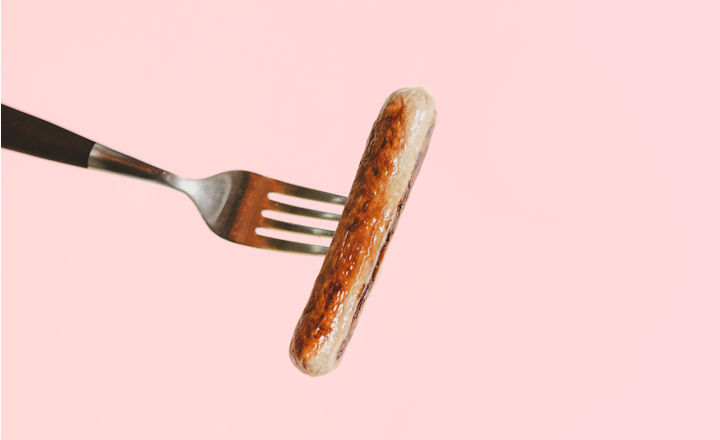 Meatable has revealed images of its pork sausage for the first time. The cultivated sausage is the first product to be announced by the Dutch company, which aims to create real meat that can serve the planet’s growing appetite without harming the environment or animals in the process.

The sausage of the future
The reveal of Meatable’s cultivated sausages marks a major breakthrough for the company. Since launching in 2018, Meatable has been developing and refining its process to grow cultivated meat using opti-ox™ technology, without ever needing to use FBS (fetal bovine serum). The company only needs one single cell sample, taken harmlessly from an animal, to replicate the natural growth of muscle and fat to create real meat. In the last few months, huge steps have been taken by the team to create the cultivated sausages which have the same structure, texture, glossiness and pronounced pork flavour that customers know and love. The product even produces the signature sizzle in the pan, just like traditional sausages – this is because it isn’t like meat, it is real meat.

It takes only a few weeks to grow Meatable’s sausages. This demonstrates the potential of cultivated meat to deliver the delicious meat that consumers love and enjoy without the negative effects on the planet, with studies showing that cultivated meat could reduce the meat industry’s environmental impact by up to 92%. With 14% of the world’s global emissions caused by the farmed meat industry, Meatable believes cultivated meat will be essential to combating climate change and creating a healthier planet

Meatable decided to create sausages to satisfy potential customers in Europe and the US with Germany alone comprising around 27% of the total volume of sausages consumed worldwide. Meatable hopes that its sausage will be the first step to making cultivated meat more accessible to the wider public.

However, as delicious as the sausages look, currently cultivated meat is not legal to sell in Europe. Meatable has been working closely with regulators in the Netherlands to support the passing of a motion that will look to enable the wider tasting of cultivated meat by the end of the year. As regulatory and safety standards develop over the next few years, Meatable hopes this will enable it to have its products widely on sale to consumers in 2025, if not sooner.

In the meantime, Meatable will continue to develop and optimize its meat with the support of its sensory panel as well as a team of world-renowned food scientists and chefs to ensure the final product boosts the right tastes and characteristics of traditional meat, as well as further the development of other products in the Meatable range.

Krijn de Nood, co-founder and CEO of Meatable, said: “This is a truly exciting moment for the entire Meatable team. To be able to see and cook our sausages for the first time was an incredible experience especially as my co-founder Daan and I were able to finally have our first taste. This was particularly exhilarating as we know that all of our hard work over the past four years has been successful in creating a real meat sausage that is indistinguishable from traditional pork sausages. We believe that cultivated meat is the future of food – meat that will satisfy the world’s appetites but without harming the planet or animals in the process. We can’t wait to enable more people to taste Meatable meat on the next step of our journey to create the new natural meat.”

Daan Luining, co-founder and CTO of Meatable, said: “Over the past four years, we’ve been constantly innovating and developing our technology to get it to this stage today where we can hear the sausages sizzle in a pan, see and, for Krijn and I, even taste this incredible product that we’ve created. I hope more people can taste it soon following the Dutch government’s motion to enable controlled tastings. This will ensure that people can experience that this isn’t just like meat, it is meat – 100% delicious meat, identical on every level, but without any of the drawbacks. This is one step on our journey to creating the new natural meat and I’m looking forward to seeing how the product develops before we can bring it to consumers in the next few years.”

Discover The New Natural today or contact the supplier for more details using the green "Request Information" button below.