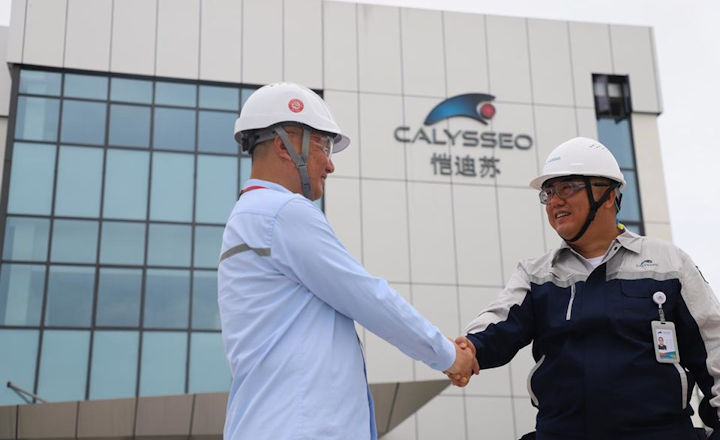 Commissioning and start-up activities have commenced at the world’s first industrial-scale FeedKind® facility, to produce a new sustainable functional protein that does not use animal or plant ingredients in its production.

The microbial protein is produced via a natural fermentation that does not use arable land, animal, or plant matter, and uses very little water in its production. Initially, production will be available for use in China, the world’s largest aquaculture market.

Whilst operating under COVID-19 restrictions, the Calysseo team maintained the schedule of the landmark facility, meaning that FeedKind® should be delivered to the first customers this year.

Jean-Marc Dublanc, CEO of Adisseo, said: “This is a significant milestone as we move towards more sustainable forms of making food. Calysseo and FeedKind offer a world first, a newly available sustainable, nutritious, non-GMO protein that offers significant health benefits over other feed ingredients, such as improved gut health and improved immune response.”

“We have a long-running commitment to improving the security and sustainability of the feed ingredient market and Calysseo fulfills a significant part of that pledge. We will provide Chinese customers with a reliable, domestically available supply of protein that meets their specific needs; produced in China for China.”

“We are looking forward to working with our customers as they begin to integrate this product into their supply chains.”

FeedKind® is part of a family of ingredients developed by Calysta, which harness the power of a naturally occurring microorganism that consumes low-cost, land-free carbon sources, converting it into a non-GMO, nutritionally rich protein, ideal for food and feed applications.

The global aquaculture market is experiencing strong growth and is expected to become the third-largest animal protein source, accounting for more than 100 million tonnes of production.

Meanwhile, the human population is set to grow to 10 billion by 2050, meaning an increasing demand for proteins.

Alan Shaw Ph.D., the co-founder, CEO, and President of Calysta said: “Cellular agriculture, where protein is grown in a controlled environment, is key to helping the world meet its future food needs. Today will go down in history as a hugely significant moment in the development and delivery of new, sustainable sources of protein to meet growing, global demand.”

“For Calysta, today is the result of years of work to develop a protein without limits – one that meets our growing demand for protein while protecting biodiversity. It also marks the beginning of a new phase in the Calysta story as we work on producing additional protein ingredients for food and feed applications.”

“We are proud to celebrate this milestone with our partner Adisseo and look forward to enjoying a successful relationship for many years to come.”

The strategic partnership between Adisseo and Calysta will directly address one of the most important opportunities in aquaculture – to provide high-quality seafood without adding extra pressure to the environment.

Pierre Casamatta, co-managing director of Calysseo, added: “Commencing commissioning and start-up activities of our maiden facility on schedule is a moment I’m incredibly proud of. We’re doing something that has never been achieved before at scale – to reach this milestone in such a short time during the enormously challenging implications of COVID-19 is incredibly rewarding and a testament to the skill and commitment of the Calysseo team, and that of our JV partners.”

“We’re thoroughly looking forward to the first product coming off the line, and to bringing FeedKind to the Chinese aquaculture market.”

Since it was discovered in 2009, EMS has wreaked havoc on the Asian aquaculture market, causing billions of dollars in losses.

Calysta’s protein platform is also approved for use in livestock feeds and pet food.

Allan LeBlanc, Calysta’s Head of Animal Feed, said: “Reaching this milestone follows decades of work and I’m proud and excited to finally introduce FeedKind to the world’s largest aquaculture market. Over the years we have proved that FeedKind is an extremely effective product and one that can help resolve several challenges for feed producers and farmers.”

The JV partners are now focusing on bringing the next phase of the development forward, bringing output to 80,000 tonnes per year. The first material from Calysseo is expected at the turn of the year.

FeedKind® will help to reduce pressure on wild fisheries. If used instead of conventional sources of protein, 100,000 tonnes of FeedKind® could mean that between approx. 420,000 – 450,000 tonnes of wild-caught fish could be saved. Used instead of vegetable proteins, the same quantity of FeedKind® could free up as much as 535 km2 of land and would save 9 billion litres of water.

For more information, visit feedkind.com or use the green "Request Information" button below to contact the supplier for details.