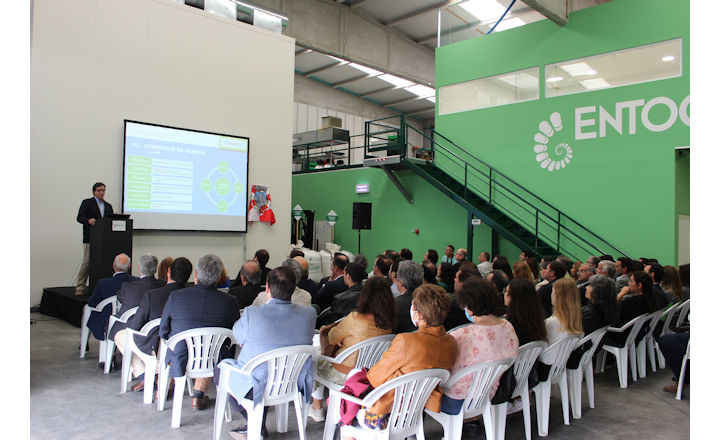 EntoGreen, a Portuguese company focused on the circular economy in the agri-food sector, has opened a Research and Development (R&D) Unit in Santarém, Portugal, creating 11 highly skilled jobs and increasing its position as an expert in insect rearing technology.

This new research center is part of a broader investment plan that the company is implementing in Santarém, which includes a bioindustrial unit to transform 36,000 tons of vegetable by-products into protein and fertilizer, utilizing black soldier fly larvae. A total investment of 13.7 million euros that will create around 60 direct jobs.

The R&D unit, now inaugurated, will allow EntoGreen to continue to develop knowledge in the use of insects as raw material for the creation of solutions that seek to contribute to the sustainability of the agri-food sector, solving two major global problems: nutritional scarcity and food waste.

Currently EntoGreen has several projects already underway in this R&D unit, two Portuguese government-funded projects, under Portugal 2020, and under the H2020, PRIMA and EEA Grants, bringing together top national scientific knowledge with that held by international experts.

All the funded projects currently underway at EntoGreen's R&D unit have the same common thread, to contribute to the sustainability of the agri-food sector. Among the ongoing projects, the NETA project stands out. This project, led by EntoGreen within the scope of Portugal2020, brings together 6 other entities from different parts of the country. The NETA project, with a global investment of €2.5M, aims to contribute to finding circular solutions for the treatment of wastewater in the agro-industrial sector using insects, where water generated in olive oil mills stands out. This project aims to create a bio-based process to reintroduce nutrients, that would otherwise be wasted, back into the value chain. In addition to this national project, EntoGreen is also present in other international consortia. Among those in which it participates, is RECOVER, a Horizonte2020 project aimed at eliminating agricultural plastics and creating new organic fertilizers, and the InFishMix project, a project funded under the EEA Grants, led by another Portuguese insect company, Thunder Foods, and with the aim of developing insect-based fish feeds, and reducing dependence on marine resources in the production of fish in aquaculture.

“This investment will allow EntoGreen to be at the forefront of insect production technology internationally, while contributing to the national affirmation of this sector at European level.”
says Daniel Murta, CEO of EntoGreen.

In a clear example of a circular economy in the agri-food sector, EntoGreen pioneered the fight against food waste through an innovative approach in the use of insects as a bioconversion tool, converting agro-industrial by-products (which would be destined for landfill or compost) into organic fertilizers and animal feed products.

The opening session of EntoGreen's R&D unit was attended by the National General Director of Food and Veterinary Medicine, Susana Pombo, who during her speech stated the importance of using insects in animal feed, focusing on the role they can play in the future of the agri-food sector in Europe. The inauguration of the unit and the symbolic unveiling of the commemorative plaque was carried out by the Mayor of Santarém, Ricardo Gonçalves, who closed the session, focusing on the contribution that this novel insect sector may have for the region and the country.

The event was attended by around 100 guests including leaders of companies and national research centers. This investment by EntoGreen, which amounted to around 1 million euros, was carried out with the aim of increasing the company's ability to create synergies and collaborate with other entities, with Daniel Murta, the company's CEO, adding that “the new R&D unit of EntoGreen is made of collaboration and to collaborate”, at the end of his speech.

Click here to find out more or contact the supplier for more details using the green "Request Information" button below.

« Previous article
How Hydrosol Can Help with
Next article »
Mylkcubator 2.0 is Ready to Lift