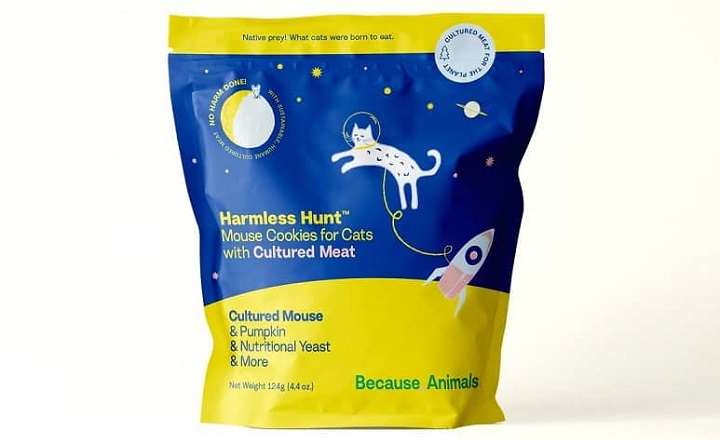 Harmless Hunt is the first cultured meat for cats

The debate around the environmental impact of animals farmed for human food takes up so much space (and rightfully so), that we tend to forget that animals are raised for pets too.

While most cultivated meat companies are taking care of the human side, a Philadelphia-based start-up called Because Animals is using cellular agriculture to create pet food.

After 6 years of R&D, Because Animals introduced its first cookies for cats in Las Vegas at SuperZoo, one of the largest pet trade shows in the world. The product is called Harmless Hunt™ and is made with cultivated mouse meat blended with other cultured ingredients, such as tempeh, miso, nutritional yeast and more.

Harmless Hunt holds at least three world records: it's the first cultured meat product for pets, the first one to be sold directly to consumers (JUST's and Super Meat's cultivated chicken right now are only available in pilot restaurants), and the first cookie for cats that includes their primal protein source.

"The public launch of Harmless Hunt is a milestone for us, for the cultured and alt-protein industry, for pet food, and for animals raised and slaughtered to feed cats and dogs,” said Because Animals co-founder and CEO Dr. Shannon Falconer. “We are finally able to provide pets with a healthier, safer, greener choice at a price that will be on par with other premium retail products.”

Harmless Hunt will be officially on the market in early 2022 (barring any regulatory or governance hurdles), although Because Animals is now taking pre-orders and getting ready to sell a limited batch at the end of the year.

A notable accomplishment of the start-up is the replacement of fetal bovine serum (FBS), with a proprietary animal-free growth media that blends vitamins, trace minerals, and growth factors to provide an environment for cell replication, at a far lower cost than FBS.

Since it’s produced in a sterile controlled environment, Harmless Hunt is free of antibiotics and pathogens, and contains no slaughterhouse by-products or rendered ingredients.

In the press release announcing the launch, the company explained that Harmless Hunt successfully passed several taste tests with the end consumers and that even finicky cats enjoyed the novel mouse protein treats.