A New Future of Food With Precision Fermentation 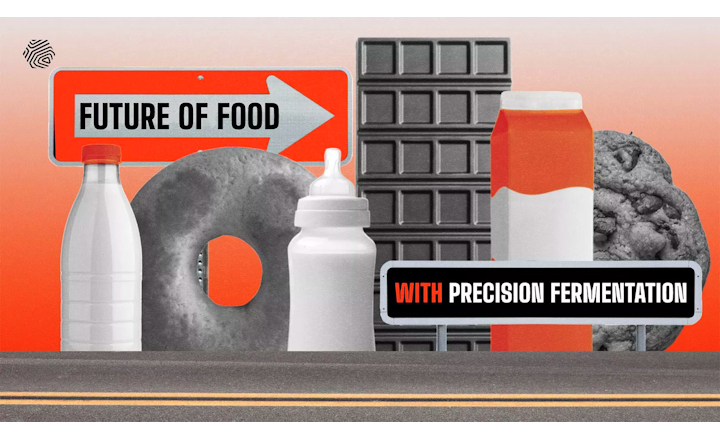 To do so, genetic engineers first select genes that code for proteins or enzymes and copy their instructions into a new strand of DNA. This new DNA strand is then inserted into microorganisms like yeasts, bacterias, or molds, which are in turn directed to produce the desired ingredients.

In this way, valuable substances that might not be abundant in nature can be readily obtained at commercial volume, unlocking a whole new world of possibilities for food.

One example of this can be found in thaumatin, a protein found in the katemfe fruit in West Africa and used as a sweetener in the region. Much like the more common natural sweeteners stevia and monk fruit, thaumatin adds sweetness without the calories. However, the protein is expensive to extract from its native source and is not cost effective compared to other sweeteners. Researchers are now investigating how to produce the sweet protein in large quantities using precision fermentation. Depending on their findings, we might soon be able to benefit from sugar-free beverages made with a naturally sourced yet flavorful sweetener!

At the same time, precision fermentation can also provide benefits beyond lowering the cost of expensive food ingredients. Vanilla, which is grown only in a handful of regions in the world, has a massive ecological and economic footprint. This is especially true of Madagascar, where 80 percent of the world’s vanilla is produced. Due to the high prices and market volatility of vanilla, the vanilla industry does not provide stable income to vanilla farmers. This can lead farmers to rapidly clear land for subsistence agriculture, resulting in illegal deforestation and loss of biodiversity.

Offering a solution to this problem, precision fermentation has already been used to sustainably meet the surging demand for this precious flavoring agent. Nonetheless, precision fermentation-made vanilla hasn’t yet caught up with the complexity of naturally extracted vanilla, which can contain over 200 molecules contributing to its flavor. That said, as the technology becomes more advanced, we may soon be seeing more of our vanilla acquired through precision fermentation.

Finally, flavorings aren’t the only compounds that can be produced sustainably using precision fermentation. There are thousands of ingredients found in foods that are difficult to source or low in abundance. One sector of the food industry that’s set to be transformed by precision fermentation is hence animal-derived ingredients, which can be notably scarce due to their origin. Given the immense use of land and water in agriculture, precision fermentation will be a key approach for producing high-value animal proteins with a lower impact on the environment.

Ultimately, regardless of how and where precision fermentation fits into the future of food, its impact seems certain to be a significant one. With TurtleTree recently announcing its development of LF+, the first marker for long-lasting change has been laid down.

In time, LF+ and similar use cases for precision fermentation could help propagate its use to the wider world of food, ushering in a new landscape of nutrition that is more potent, much healthier, and immeasurably kinder than ever before.

Visit Turtletree for more or use the Request Information button below to contact the supplier.