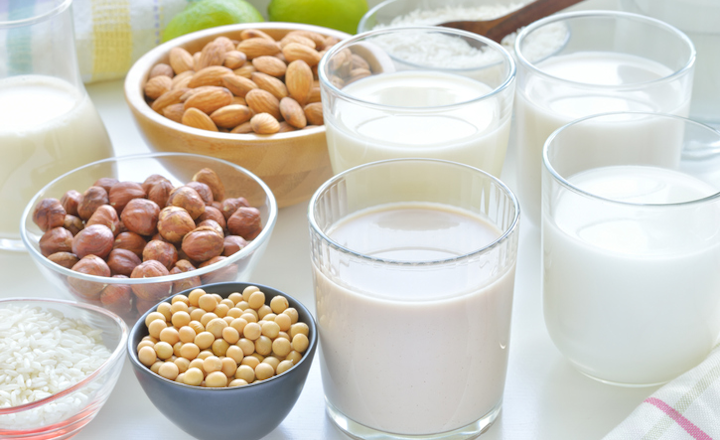 The Market for Dairy Alternatives: Data & Trends
The market for animal-free dairy products has been growing steadily in recent years. The leading category is plant-based milk, whose sales in the US – according to data published by the Good Food Institute - reached $2.6 b in 2021, with a 33% growth over the previous three years. In the whole milk segment, plant-based products account for 16% of market share. As the sales of traditional milk are decreasing, this gap is likely to become smaller over time.

Although most of the alternative dairy products on the market today are plant-based, two other production methods are gaining ground: fermentation and cellular agriculture. Here we give an overview of all three.

In the plant-based milk and dairy segment, the top four ingredients are almond, oats, soy, and coconut. Almond milk alone accounts for 59% of sales in the category.

One of the main challenges for plant-based milk producers is that animal milk has specific qualities that are not easy to replicate with plant-based ingredients: For these reasons, there has been less innovation overall in the other segments of the alternative dairy sector, like ice cream, cheese, or yogurts, despite their general growth. To bridge this gap and make alternative dairy become a mainstream product at the same level as animal-based dairy, producers are working on four aspects: Milk and Dairy from Advanced Fermentation Techniques

Fermentation is a centuries-old food processing technique, experiencing a phase of innovation and development.

When we talk about fermentation in the alt protein space, we mean two things: biomass fermentation and precision fermentation. Both take advantage of the ability of microorganisms to multiply but in different ways.

Biomass fermentation grows microorganisms with high protein content, such as yeast, filamentous fungi, or microalgae. The resulting biomass can be used as is or processed into high-purity protein. For alternative dairy, however, the most promising technique is precision fermentation. More than 60% of food-tech start-ups that use this type of biotechnology are focused on dairy.

Precision fermentation uses microorganisms as hosts to produce specific proteins or other compounds, such as fats, enzymes, or vitamins, with a high level of purity. Whenever the microorganism would not produce the desired compound naturally, precision fermentation is coupled with genetic recombination. The most famous application is the Impossible Burger’s leghemoglobin, which provides a quite realistic meat-like look and taste. The compound is naturally found in soy, but it’s produced by genetically modified yeast. The application of genetic recombination to precision fermentation is not new. It’s been used for decades in the pharmaceutical industry to produce human insulin, vaccines, and drugs. Until recently, the only food application was limited to the production of rennet.

Examples of precision fermentation companies with dairy products already on the market are Perfect Day and Nature’s Fynd.

Cellular agriculture is the new frontier of food production. In cultivated meat, muscle cells are taken from a live animal and then grown in a bioreactor.

Novel alternative dairy products and ingredients are facing regulatory challenges on top of technical ones.

For plant-based dairy, the biggest hurdle is labeling. In both the US and the EU, the use of terms such as “milk,” “yogurt,” and “cheese” on plant-based products has faced opposition from the traditional dairy industry and regulators, who claim that it might confuse consumers. Conversely, plant-based advocates and producers believe that consumers are perfectly aware that ‘almond milk’ doesn’t come from cows.

In the US, the use of dairy-related terms in plant-based products is not yet regulated at federal level (the FDA is expected to release draft guidance on the labeling of plant-based milk alternatives by the end of June 2022). At state level, however, several legislators have introduced (or tried to introduce) restrictions to the use of terms such as ‘milk’ and ‘burger’ with plant-based products. In many cases, these attempts were deemed as a violation of the First amendment on the freedom of speech.

In the EU, the terms ‘milk’, ‘cream’, ‘butter’, ‘cheese’ or ‘yoghurt’, have been prohibited on non-dairy products since a ruling of the Court of Justice in June 2017.

In October 2020, however, the European Commission voted on an amendment that would have added even more restrictions. A few months later, the European Parliament reversed the decision and decided to keep the old limitations. The alt dairy industry welcomed this decision with a sigh of relief. If the amendment had come into force, it would have prohibited the use of similar packaging or other terms normally related to dairy products, such as ‘creamy’ or ‘buttery,’ and even a ‘milk-free’ allergen declaration.

Future Proteins: Sustainable Processing and Packaging qPCR for the Detection of Allergens and Animal Residues in Alt Protein Products Your Guide to Ingredients for Alternative Dairy Products view all