An Introduction to Cultured Meat 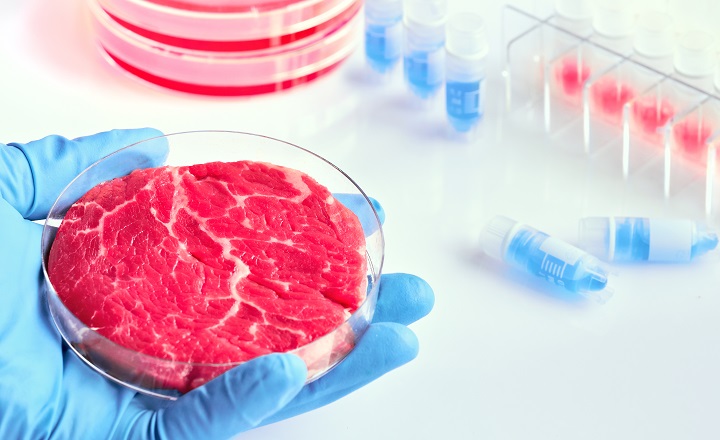 It was 2013 when a team led by Mark Post, professor at the University of Maastricht, presented the first beef patty created in a lab. It was an important proof of concept, as it showed that producing in vitro meat was technically possible.

How Cultivated Meat is Made
The process to cultivate meat aims to replicate what happens in the animal body. It can be divided into three steps.

Initially, some stem cells are taken from the live animal. These will then be able to differentiate into different types of cells needed for the final product: muscle fibres, fat and connective tissues.

Next, cells are multiplied inside a bioreactor using a media composed of nutrients and growth factors to control their behaviour, such as when to grow, what type of cell to become, and how to behave in the culture environment.

The final step is called scaffolding. This is where the real tissue engineering takes place and cells differentiate forming the 3D structure of the final product. The purpose of the scaffold is to support the meat’s structure. It can be biodegradable or edible, and needs to allow micronutrients to reach all tissue cells.

(For a more detailed description of the process, check this video.)

Challenges of Cultivated Meat
The two main challenges of lab-grown meat were immediately clear from its introduction in 2013.
One was lowering the prohibitive cost of €250,000 for the first hamburger to a commercially viable level. Thanks to continued improvements, the problem has been mostly solved: Mosa Meat announced its plan to launch their first small-scale burger in 2021, and Because Animals also aims to sell its mouse-based cat food in 2021.

A major area of optimisation has been (and still is) cell culture media, which makes up 55-95% of the cost of a cell-based product. In particular, the challenge is to find a low-cost replacement for Foetal Bovine Serum (FBS), the most common medium used in cell culture applications. FBS is not a viable solution for the cultivated meat industry, as its results can vary and the way it’s obtained (with blood drawn from a bovine foetus) is inconsistent with the animal-free approach of cellular agriculture.

The first cultivated meat start-ups had to develop the whole process, from cell extraction to the final product. In the last three years, several B2B start-ups have emerged, specialising in support areas, such as growth media, cell line development, scaffolding, and bioreactors. This is a sign of the maturity within the sector, and it’s also likely to speed up optimisation and cost reduction.

The other challenge of the lab-grown industry is to mimic animal meat’s taste, look and texture. The level of difficulty varies depending on the product: minced meat, for example will have a simpler structure than a steak. Optimising cell lines and scaffolding will be crucial in order to improve this aspect, although, according to the Good Food Institute, cell-based meat doesn’t need to be an exact replica of animal meat, but to simply “represent tissue structure sufficiently to replicate the appropriate texture and mouthfeel.”