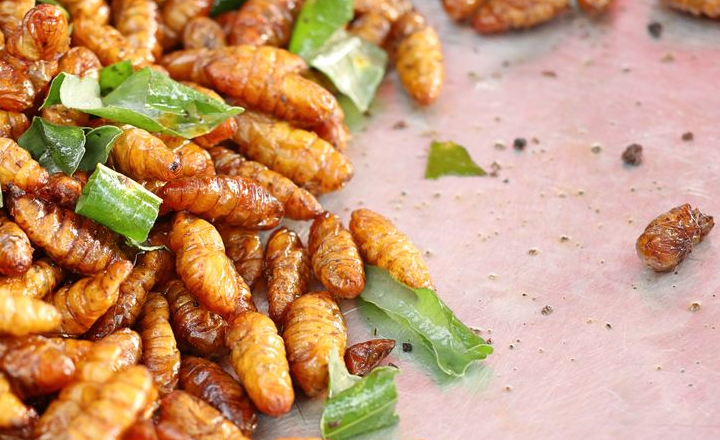 While insects have been a staple in all civilisations for thousands of years  (studies quoted by the Food and Agriculture Organization estimate the number of edible insects between 1,000 and 1,900) Western culture has always considered them repulsive. This attitude, however, is slowly changing and the potential of insects as an alternative source of food and feed is now widely recognised.

Insect rearing, processing and applications
In modern large-scale farms, insects are reared in self-contained breeding units and harvested at different development stages (larvae, pupae or adults), depending on their species and applications.

After the killing step, insects are freeze- or heat-dried and then ground or kept whole. Insect meal can then be further fractioned into its main components: high-protein flour, fat/oil, and chitin, a polysaccharide that makes up insects’ shells and has several applications as an antibacterial agent and biopesticide. Finally, insect frass can be used as soil compost and fertiliser.

As an alternative food source, insects are highly sustainable. Compared to traditional farmed animals, they:

Legislation in the EU
Despite its great potential, the insect industry in Europe and the U.S. is still in its infancy due to regulatory uncertainties.

In the EU, the use of insects in feed for farmed animals is subject to limitations of Regulation No 999/2001 for the prevention of Bovine Spongiform Encephalopathy (BSE), which prohibits the use of animal proteins in feed for ruminants and extends the prohibition to poultry and pigs.

In 2017, an amendment introduced an exception for farmed fish, allowing seven species of insects to be used in aquaculture feed:

As these limitations only apply to proteins, insect oil can be used for feed without any restrictions.

There are very few limitations regarding the use of insects in pet food. Regulation 1069/2009, about the use of animal by-products and derived products not intended for human consumption, identifies terrestrial invertebrates as low risk (‘Category 3,’ in the law). They can therefore be used in pet food, as long as they are not pathogenic to humans or animals, and are not spoiled.

Selling insects for human consumption is still officially prohibited in the EU. Insects are subject to the Novel Food regulation and need to pass a thorough safety review by the EFSA before being approved. The good news is that six species are at the final stage of this review and should obtain the final approval in 2021. These are:

In spite of this general prohibition, several countries have introduced some level of tolerance for insect-based food, creating very different legal statuses. Before using any type of insect as food ingredients it’s therefore necessary to consult local regulations.

Insect-based ingredients legislation in the US
In the US, the use of insects as food is neither explicitly allowed nor forbidden. However, in some unofficial statements from the FDA and the USDA (see examples here), insects are considered food if they are farmed with that intended use. In that case, they would have to follow all safety requirements of other foodstuff. Until the matter is specifically treated by lawmakers, the use of insects in food remains in a regulatory limbo.

In order to be used as ingredients in feed and pet food, insects need to be included in the official list of allowed ingredients managed by the Association of American Feed Control Officials (AAFCO). As of now, only black solider fly larvae mela has been approved.

Nutritional values of insects
Insects are rich in protein and fats, low in carbohydrates, and contain important minerals like calcium and iron. Nutritional values will vary greatly, depending on the species, the metamorphic stage (e.g. larvae or pupae are usually more nutritious than adult insects), diet and processing methods.

Here below are some guidelines of nutritional content per dry mass of larvae and adults of insects approved for feed, as indicated by IPIFF.

Examples of food product launches
Many insect-based products entered the market in recent years.
According to Mintel's Global New Products Database, 103 products containing insects were launched worldwide between 2004 and May 2018, most of them between 2014 and 2018.

Europe is the region with the highest number of launches, while the UK was the country with most launches in Europe.

Types of insect-based products include:

Cricket flour is the most common ingredient in insect-based formulations and is typically combined with other traditional flours like wheat.

Future Proteins: Sustainable Processing and Packaging qPCR for the Detection of Allergens and Animal Residues in Alt Protein Products Your Guide to Ingredients for Alternative Dairy Products view all